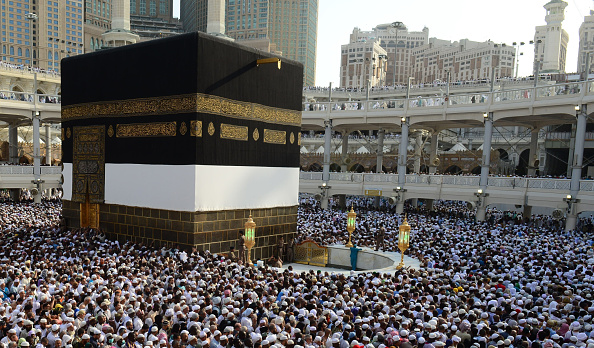 May Allah accept the Hajj of the people who were fortunate enough to make it this year. While people are circumnutating around the Ka’ba, Islam’s, holiest Mosque, it is impossible to distinguish the rich from the poor, the immoral from the virtuous, the farmer from the engineer, the convert from the born Muslim, or the PhD from the illiterate. Nor is it possible to define with any accuracy just by looking, what a person’s ethnicity, group, nationality, or language is. The only considerations which determine incongruence between one pilgrim and the other during Hajj is their faith, their god consciousness (taqwa), each person’s individual physical, emotional, and spiritual challenge, and the personal prayer of each pilgrim as they perform the required rites of the Hajj as guests of God.

Hajj is the only place on earth, and the only season of the Islamic calendar year, where race, power, occupation, status, ethnicity, or politics have no standing. There are no lands to conquer, no identities to define, no Islamophobia to fight, no images of Islam or Muslims to defend, no organizations to speak on your behalf, no counter narrative to advance, no talking points to memorize, no television cameras to prep for, and no one to convince of your legitimacy or sincerity except the Almighty God.  During the Hajj, all that is left is submission to Allah, and the reality that every Muslim has the same rights and obligations as every other Muslim. The only recognized enemy and the only object of aggression during Hajj are the shaitaan [devil] himself, and the three stones that pilgrims throw against him. As Muslims, we are  not taught to be enemies of each other, but instead to take the shaitaan as our greatest enemy.

It was during the Hajj, that the Prophet (SAWS) delivered his farewell sermon. In it, he unequivocally declared, “All mankind is from Adam and Eve, an Arab has no superiority over a non-Arab nor a non-Arab has any superiority over an Arab; also a white has no superiority over black nor a black has any superiority over white except by piety (taqwa) and good action. Know that every Muslim is a brother to every Muslim and that the Muslims constitute one brotherhood. Nothing shall be legitimate to a Muslim which belongs to a fellow Muslim unless it was given freely and willingly. Do not, therefore, do injustice to yourselves. Remember, one day you will appear before ALLAH and answer your deeds. So beware, do not stray from the path of righteousness after I am gone.”

The words of the Prophet are as relevant today as they were spoken more than fourteen centuries ago. Perhaps even more so. The Hajj is a yearly reminder that we all are equal in the sight of Allah and that we only excel above one another through taqwa [piety]. The Hajj also reminds us that we do not judge a book by it’s cover. The Prophet (SAWS) said, “Verily Allah does not look at your shapes or your bodies but He looks at your hearts”.[1] The only other time where the entirety of the Muslim ummah and of humanity will stand in such uniformity is the Day of Judgment. In this sense, the Hajj gives us a glimpse of what it will be like standing before Allah in that our race, our wealth, our family or our status will not matter. “The Day whereon neither wealth nor sons will avail, Except him who comes to Allah with a heart free (from evil)”. [26:88-89]

The type of equality embodied in the Hajj, is the type that the Prophet (SAWS) spoke of during his Farwell sermon. This is the kind of justice that makes us unafraid to look in the mirror at our selves, the kind of justice that depoliticizes our religion, and the type of justice where we do not simply move from campaign, to campaign, but stand firmly on solid principles. This is the type of justice upon which Allah created human beings: “O mankind! We created you from a single (pair) of a male and a female, and made you into nations and tribes, that ye may know each other (not that ye may despise (each other). Verily the most honored of you in the sight of Allah is (he who is) the most righteous of you. And Allah has full knowledge and is well acquainted (with all things)”. 49:13

Indeed, Islam has been hijacked, not only by groups like ISIS, and al-Qaeda, but also by nationalism, racism, elite, ethnocentricity, political Islamism, war-mongering propaganda, violent extremist, and sectarian demagoguery each claiming to represent the totality of Islam. Islam is the religion of Allah, He owns it, we are all His slaves. We can only choose to submit or not submit Islam and to its higher ideals. We can reclaim our faith by returning it to its rightful owner, and that is God Almighty, and no one else.

Resurrecting the Hajj paradigm and picking up the cause of justice and equality in and outside our faith is a daunting proposition for many Muslims, but its time has come and we will be much better off for it. It all comes down to being fair and just as individuals and as an ummah.  One of the most difficult things about upholding justice, is that you sometimes have to stand up against your own self, and against people who are just like you, who belong to your group, who share your ideology, your race, your nationality, in defense of someone who is different than you.

Injustice is our Berlin wall whose mortar is an amalgamation of racism, nationalism, elitism, denial, political Islam, violent extremism, tribalism, and various forms of sectarianism added to the mixture of our faith over a course of centuries.  On the other side of the wall is the true Islam, which belongs to no one, except Allah be He Exalted and Just. There can never be any true Islam without justice, and there can never be justice without equality. In order for Muslims to move forward as a civilization, we will have to tear down the Berlin wall of injustice that exists in our faith practice. It may have to be dismantled brick by brick, section by section, pebble by pebble, but sooner or later, Allah be my witness, I believe that eventually, it will come down.  –

American born Luqman Ahmad a Sunni Muslim, is the son of converts to Islam. He is a writer, consultant, patriot, and until recently, has been the Imam of a Northern California mosque for twenty years. Recently he headed up a new organization (Islamic Center of Del Paso Heights) to address the needs of  Muslim converts.  He is a former executive committee member of the North America Imams Federation, a founding member of COSVIO, (the Council of Sacramento Valley Islamic Organizations), and the author of the book “The Devils Deception of the Modern day Salafiyyah Sect“, a detailed look at modern salafiyyism, the ideology which forms the mindset of ISIS. He has written blog posts challenging ISIS, Anwar Awlaki, and BOKO Haram on his blog, imamluqman.wordpress.com. The sentiments shared in this article are his own and not representative of any of his professional affiliations. He can be reached at imamluqman@icdph.org.