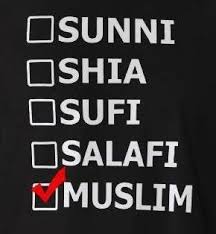 Globally, Muslim sectarianism affects almost all Muslims in one way or another. Sometimes it’s relatively harmless. However, at other times, it can have terrible consequences and become a scourge and blemish upon the ummah. Muslims in many places outside of the United States and in many Muslim countries are already sectarianized in one way or another. People are born in a state of fitra (natural submission) but they are raised upon whatever the prevailing sect, group, or sub ideology of their family, their tribe, their country or their village. If they’re from Pakistan, it could be Deobandi, Barweili, Tablighi, Ahmadiyyah, or Ahul Hadis. If it’s Egypt, it could be Ikhwani, Salafi, jamaa’ah islamiyyah, or any one of a number of Sufi groups. If it’s Algeria it could be Maliki, it could be ibaa’dhiyya and so on.

Many Muslim groups could not thrive as a sect, raise money or be able to keep their adherents in check without having a sub-ideological focus, or without being in opposition to another Muslim group or without a daily infusion of fear into the Muslim body that there is a bogeymen out there. The modem day Salafist phenomena in the United States is just one example of that. At their height, they would ascribe medieval, and early islamic sectarian labels to other Muslims and then proceed to demonize them. They would attach the title Mu’tazilite, Raa’fidee, Juhamee, and Khawaarij to everyday converts who have never even heard of such titles and groups, and of course to many of them; to be a true Salafi, you must call yourself a Salafi.

This methodology of factionalization is not only a characteristic of some modern day Salafists, it’s typical of many islamic groups who enter the United States already sectarianized. Sectarianism works better in a small village somewhere where everybody is of the same tribe, or believes the same, thinks the same, and has the exact same values for generations. However, in Muslim America, sectarian Islam creates an entirely different dynamic, especially for the convert or revert to Islam. It becomes especially problematic when the new Muslim convert is compelled by pressure or by what they presume to be the requirements of faith to join or belong to a particular Muslim sect. I recall having some brothers who joined a particular Sufi sect telling me that according to their sheikh, Islam was not enough, that there was some secret knowledge that needs to be acquired and that can only be gotten through the sect and by means of the sheikh that they now pledged allegiance to.

Sometimes converts/reverts comes across, or initiates into one or another of these sectarianized versions of Islam, and do not even realize what hit them until much later (sometimes years) when they try to raise their children on the sect’s sub-ideology or on veneration of the sect’s founder or leader, or until they go and try to integrate with another group of Muslims and then they discover that one group hates, or is in opposition to the other. This can be a pretty mind wrenching, faith shaking discovery for someone who just recently entered into the religion of Islam.

When people convert to Islam, they are excited about being Muslim and are ready to do whatever it takes (at least in the beginning) to be a true Muslim. This is generally a good thing, but it also makes them vulnerable to the culture of Muslim sectarianism. Convert Muslims come into the religion without belonging to, or yearning to belong to any particular sect; they come in on pure tawheed (monotheism) without sectarian alignment and simply want to belong to, and be with the Muslims. This trusting disposition makes the Muslim convert a natural mark for sectarianists and easy targets of post conversion proselytizing. Many if not most new converts to islam are very naïve to the nuances of Muslim sectarianism and in-fighting. It’s like; okay, now that you are a Muslim, what kind of Islam do you want?

Even worse, some people are presented with the notion that they really aren’t a true Muslim until they join this or that sect, or initiate into this or that group or tariqa, or follow this or that sheikh. People are in essence, taking two shahadas; the shahaadah of Islam, and then, the shahaadah of the sectarian group. Granted, there are many people who are part of a group or sect, but are not hardcore sectarianists. However, make no mistake about it; within every major sect of islam in America, there are hardcore ideologues who police the beliefs of its members.

Extreme Salafism has had its heyday amongst American Muslim converts, but it is waning. There are more ex-Salafis now than there are Salafis. A lot of Muslims have discovered that you can follow the ways of the Salaf [righteous predecessors] without having to call yourself a Salafi. That realization for many, was an eye opener of cathartic proportion. These days, Sufism is the hot craze amongst many indigenous American Muslims. This is not a condemnation of Sufism as a discipline within legitimate islamic practice. It’s just an honest assessment of where we are in Muslim America.

People are using their Sufi affiliation and titles like gang signs. Many of the more popular Sufi tariqas maintain that if you leave the order, or disengage from the sheikh, then you have left true Islam, and will fall into disfavor with Allah. That’s a pretty hefty psychological burden to lay on an unsuspecting, impressionable, recent convert to Islam. Even more so if the sheikh lives thousands of miles away and you’ve never even met him face to face. Ironically, many Muslims are discovering that you can embrace and practice Islamic spirituality according to what the Prophet ﷺ practiced and taught, without having to call yourself a Sufi and without belonging to a Sufi sect or group.

Converts come into the religion believing in tawheed, Muslim unity, and in the simplicity of Islam, and are then betrayed on so many levels. Sometimes, they are literally chased away from Islam by racism, marginalization, or by the pressure to give up their critical reasoning, their common sense, and their identity. Other times it is the sheer confusion and perplexity of sectarianism that leaves their heads spinning. There are many Muslims who convert to Islam, and gradually understand and practice the faith, get married, perhaps have children and produce healthy viable Muslim families that continue into the next generation. However, that’s not the way it is for many converts during the times we live in today.

Many new Muslim converts in America these days are a one shot, single generation deal. They convert to Islam but it doesn’t really spread to their children or next generation. The average convert today is simply subject to too many fluctuations, and quirky influences in his or her faith and ideology in the name of Islam to keep up.

It’s interesting to note that most American Muslim converts to Islam already believed in god before they converted to Islam. In fact, most of them believed in one god. For these new Muslims, Islam only confirms and gives deeper meaning and definition to what they already believed before they converted to Islam. Which in part, is what lead them to Islam in the first place. Many converts to Islam where already honoring their parents, being kind to their neighbors, keeping family ties, giving charity with their hard earned money and were already truthful and honest before they ever knew about Islam.

There is nothing purer for the one whom Allah Himself guides to Islam than the Islam that was practiced and taught by the Prophet ﷺ. Sectarianism for the Muslim convert is a demotion of faith, not a promotion of faith. It is imperative for converts to Islam to understand it’s damaging effects and to extricate themselves from the cyclical morass and confusion of modern Muslim sectarianism. In my humble opinion, there is no better Islam for them, than the original version, without supplemental editing or ideological appendixes. I believe and will in sha Allah, continue to believe that Islam is best practiced when it is independent of sectarianism. Which is why Allah sub’haanahu wa ta’ala said; “Be not like those who are divided amongst themselves and fall into disputations after receiving Clear Signs: For them is a dreadful penalty”. (Quran 5:105)

We cannot understate the effects of Muslim sectarianism on American convert communities. I imagine that one of the biggest drawbacks to Muslim sectarianism for converts is that you’ll have people living in the same city or the same are of a city and there will be so many foreign (and domestic) spheres of influence that get in the way of them working together while at the same time, they all share the same space and deal with the same problems and obstacles. Their sectarianism creates a reluctance and sometimes an ideological impediment to work together.

(These are my words and not anyone else’s, and represents no organization other than Mosque Without Borders.)

Imam Abu Laith Luqman Ahmad, a Philadelphia native, is a writer, a researcher. He is a former executive committee member of the North America Imams Federation (NAIF), and the CEO of ‘Mosque Without Borders’, an organization that addressed Muslim sectarianism and critical issues that impact the loves of Muslim converts in the United States. He is also and the author of the new book, “Double Edged Slavery “, a critical and authoritative look at the condition of African American and convert Muslims in the United States, and the book: “The Devil’s Deception of the Modern Day Salafi Sect “, a look at the ideological underpinning of modern Salafist extremism. He blogs at imamluqman.wordpress.com, and can be reached at imamabulaith@yahoo.com.