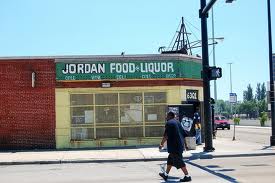 Although it’s not a topic that makes its way too often to the forefront of American Muslim dialogue or concern, Muslim owned liquor stores is an important issue. It’s represents perhaps the most visible presence and contribution of American Muslims to inner city America. The number of owners and employees of local Muslim owned liquor stores in inner city American likely far exceeds the number of attendees of Jum’ah at the local storefront masjid in the hood. Muslim business owners in the average poor or Black neighborhood in America where it’s legal to sell liquor, pull more gross revenue out of inner city neighborhoods each day from the sale of alcohol, crack pipes, meth pipes, blunt wrappers (for weed), and lottery tickets cigarettes, than the average majority Black or convert attended masjid in the United States collects in zakat and or sadaqa in an entire year.

The affect on the trajectory of the Black American Muslim and convert civilization has been more devastating than many of us care to imagine. It is the major cause of anti-Muslim sentient in inner city America. Still it’s an issue that we are nearly completely stuck in the sand about, and have not yet mustered the courage to address it an a domestic ummah.

We don’t get too riled up about Muslim liquor stores in the hood but it’s actually a major deal. In every major city where it exists, Muslim sale of drug paraphernalia, alcohol and lottery tickets, sidetracks the da’wah and weakens the da’wah to Islam. The visual take away is that Muslims are parasites in the community and a necessary evil that profits on people’s addictions and treat the locals like crap and the Black American Muslim converts are good hearted and somewhat sincere but just plain castrated men in their own religion.

Of course this sounds harsh and crass but I’ve been an Imam for more than 20 years in the hood and that is the perception. Even worse. Of course Muslims thrive in the hood because these are our neighborhoods. Many of us are from there, our family is there, and we grew up in these plantation-like urban enclaves. Many of us are in and out of these penal institutions which feed off of a steady stream of poor and Black men and women. So alongside the people from our neighborhoods where we wield some clout which have waned considerably over the years. However, the perception in the neighborhood is that we are cool but we don’t have much to offer, even many who convert feel that way. We are viewed as subordinate Muslims and they generally view immigrant Muslims as racists with the disposition of slave overlords who supply the products and accessories needed to sustain a lifestyle of addiction.

Now of course some of you may hem and haw about this, and may even feel insulted (typical response) lol. But many of you if not most of you are completely unaware of this reality. If you were then you would understand exactly what I mean. If you ventured for yourself and took a good look, you’d see for yourself.

Pick a city, Los Angeles, St. Louis, Detroit, Sacramento, here in Toledo, Oklahoma city, the Carolinas, New Orleans, Chattanooga, Montgomery Alabama, Houston Texas and many other cities where Muslims hold sway in the liquor and party store business, the da’wah to Islam is tanked. Even when Muslims go out on the street, first thing people say is; “what about your brother over there selling liquor? (Sometimes they even sell drugs). Cities like Philadelphia have been somewhat an exception because only the State of Pennsylvania can sell liquor in Pennsylvania. However, elsewhere, wherever the law allows. The American Muslim liquor, crack pipe, meth pipe, blunt rollers and lottery business continues to thrive as a premier cash crop that shamelessly eats away at the fabric of inner city society, while the rest of us looks away.

Shaykh Luqman Ahmad is an Imam and resident scholar at the Toledo Masjid al-Islam in Toledo Ohio. He can be reached at imamabulaith@yahoo.com