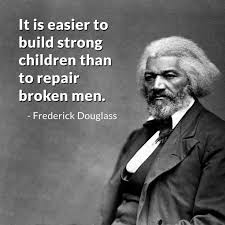 Being a Muslim man is not as easy as people make it seem. We are not the all powerful tyrants and arrogant ogres as some of us, especially some Muslim women characterize us to be. Muslim men have obligations and responsibilities for our wives, our children, our families, our parents, to other Muslims and to society in general. Responsibilities that extend way beyond how much money they dish out. There is a distinct anti-man sentiment circulating through our already decimated ranks in Black Muslim America.
People talk about Black Muslim men and their failures as husbands, as fathers, as leaders and even as Imams, many times criticizing the very things that would make them good Imams, good fathers, good husbands, and good leaders in the sight of Allah. Often times what is lost are any consideration of their obligations to Allah in any of these matters.

Part of that is just plain not knowing our own religion (ignorance) and part of it is staunch aversion to our scriptures, and part of it is that are demons within our ranks. Muslim men are not just responsible for the financial upkeep of their children but he’s responsible for the way they are raised, the values and the religion that they are taught, and the lifestyle they are taught. Additionally, maintenance, preservation, establishing, and passing down the noble religion of Islam. All of that is mandated in our scripture.
The first to promote the anti-man doctrine in the history of mankind was Ibis/Satan. And he is not even a man, but a demon, who employs men and women demons. We can blame the system, blame slavery, blame the criminal justice system, white supremacy, poverty and many other things for contributing to broken Black Muslim men, but we have to consider that we may be guilty as well, or at least complicit of breaking our own men, way before they’ve reach manhood.
We are in an age of much confusion, not knowing our scripture, and multiple and simultaneous ideological attacks from all directions. some of us inadvertently put our men in a nearly impossible position. If he upholds the religion he is a tyrant, if he doesn’t uphold it, he is a failure. It is part of the obligation of a Muslim man to stand up for the truth, and for scripture, yet, many times men are excoriated or even hated for speaking the truth, while praised for political correctness.
Another example. Muslim men must serve as the Imam of their homes, it is not an option for them. A Muslim man can’t simply abdicate the imamate of his home, wife and family and simply because another man abused it or because current Muslim sentiment is opposed to it. As Imams of their home, and families they are obligated to exert a certain amount of control over what goes on in their homes, yet exerting any control over your family is considered, well, “controlling” to many Muslims and controlling is viewed as a bad thing even through the Sunna commands it.
We live in an age where people, sometimes total strangers, define for a Muslim man what kind of man he is, or should be or whether he is even a man or not. A lot of men, especially those not raised by men, and thev are plenty, do not even know what to do with that. Some men reach their thirties or even forties and still don’t know what a man is. Then they are criticized for not knowing when we contributed to their confusion. That is a lot of pressure and confusion for a young Muslim man, especially as we move towards praise of the feminine man, while loathing such men at the same time.
Muslim men are obligated to enjoin the good and forbid the evil, especially when it is thrust right in front of their faces, when they abandon that they are consequences for that with their Lord, so they get stuck between the ire of the people (Muslims) and the anger of Allah. We haven’t even started to unpack this conversation yet. Sometimes we break our own men. And this is just the tip of the iceberg, And Allah knows best.

Imam Luqman Ahmad is an Imam and Resident Scholar at the Toledo Masjid al-Islam in Toledo Ohio. He can be reached at imamabulaith@yahoo.com