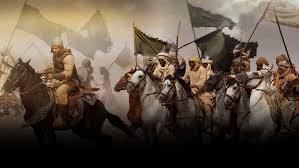 Abu Hafs, Umar ibn al-Khattaab, is regarded as the second closest companion to the Messenger of Allah after Abu Bakr as-Siddiq. If you only read two or three paragraphs of history about Umar ibn al-Khattaab, you might walk away thinking he was a brute or a barbarian as some Muslims have (ignorantly) described him. On the contrary, he was one of the most compassionate, God fearing and capable Muslim leaders in Muslim history.

Umar used to remove or demote his commanders for tyranny or excess. He once removed Amr ibn al-Aaas, the wealthy Qurashite from his position as Governor of upper Egypt after he led the conquer of it on behalf of the Muslims, because of his excesses and accumulation of personal wealth.

Umar was the first Muslim in the prophetic era to establish the precedent of making salat at the Ka’ba, he used his “strongman” reputation to strengthen Islam. After he converted to Islam, he made it known to t, and went to pray at the Ka’aba. His actions, gave the Muslims the confidence to pray openly. Abdullah ibn Mas’ood said, “Umar’s embracing Islam was our victory, his migration to Medina was our success, and his reign a blessing from Allah. We didn’t offer prayers in Al-Haram Mosque until Umar had accepted Islam. When he accepted Islam, the Quraysh were compelled to let us pray (publicly) in the Mosque“. [at-Tabarani]

When Abu Bakr as-Siddiq became the successor of the Prophet (SAWS), they used to call him; ‘Khalifatu Rasoolillaah‘ (Successor of the Messenger of Allah). When Umar succeeded Abu Bakr, they started to call Umar Khalifatu Khalfati Rasoolillaah (The Successor of the Successor of the Messenger of Allah). Umar thought that the title was too long, so he changed it to ‘Amir al-Mu’mineen‘ (Commander of the Faithful). Umar (RA) ordered the freeing of thousands of slaves and prisoners from the war with the apostates. His reign lasted about 10 years, and he ruled over roughly a third of the civilized world during and he sought to ensure that there were people in position to see to the affairs of the ummah.

Amir al-Mu’mineen Umar divided the Caliphate into provinces. Each province was administered by a governor or Wali, and divided into about 100 districts. Each district was under the authority of an Amir, and under each Amir was a Katib, or Chief Secretary, the Katib-ud-Diwan, the Military Secretary. the Sahib-ul-Kharaj, the Revenue Collector, the Sahib-ul-Ah’dath, the Police chief, the Sahib-Bait-ul-Mal, the Treasury Officer, and the Qadi, or Chief Judge.

In the hadith of Abu Sa’id Al-Khudari (RA), the Messenger of Allah (SAWS) said, “Whoever hates Umar hates me. Whoever loves Umar loves me. Allah boasts about the people at the evening of Arafat generally and boasts of Umar specifically. Allah did not send a prophet except that his nation had a speaker (clairvoyant)and if there was one of my nation it would be Umar.” They asked, “O Messenger of Allah how does he speak?” He said, “Angels speak upon his tongue.” [at-Tabarani]

Imam Ahmed, Al-Bazzar and Al-Tabarani all report that Abdullah ibn Mas’ood (RA) said, “The virtue of Umar ibn Al-Khattab over the people is because of four things; when he spoke about the captives on the battle of Badr he gave the opinion that they be killed and Allah (Mighty and Majestic) revealed, “Had it not been for a previous ordainment from God, a severe penalty would have reached you.” (Quran Al-Anfal 8:68).

By his mention of the instruction for the Hijab for women by the Prophet (SAWS). Zaynab said to him, “You are with us O son of Al-Khattab and revelation descends in our home.” Then Allah (Mighty and Majestic) revealed, “And when you ask of them anything, ask it of them from behind a curtain.” (Quran Al-Ahzab 33:53).

By the supplication of the Prophet (SAWS) said, “O Allah support Islam by Umar.” There is an opinion that this was before Abu Bakr took allegiance. Al-Tabarani reports from Tariq ibn Shihab that Umm Ayman said on the day Umar was killed, “The day Islam became frail.”

In the hadith of Abu Sa’id Al-Khudari (RA) he narrated that the Prophet (SAWS) said, “If Allah was to send a messenger after me it would be Umar ibn Al-Khattab.” Yet, Umar ibn al-Khattaab was a simple man who dwelled amongst the common people. That was the Umar that we know. The first Muslim ruler to hold the title; “The Commander of the Faithful”. Hardly a brute or a barbarian, he was a champion of truth and justice, may Allah reward him. Ameen.