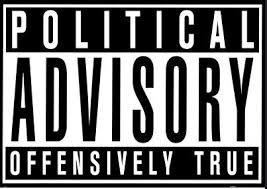 Can American Muslims freely and candidly discuss issues without crossing the boundaries of political correctness? The simple answer to that is; no, no we can’t. Now pay attention. Political correctness is incompatible with moral correctness. Although it’s probably politically incorrect to say that, it is the hard truth and we need to recognize it.

If we as Muslims living in America want to engage in honest discourse amongst ourselves as American Muslims, then we cannot continue to gloss over the obvious and take the bogeyman approach to problems as if they do not exist, or cast aside our deep-seated dysfunctional malaise as if it were figments of our imagination. We’re making headway though but we have to be spiritually and emotionally mature enough to have the open and candid dialogue that we need, and we need to be brave too because it won’t be a walk in the park. No, we need not get personal by calling each other names and blasting leaders personally. There is no one person responsible for our condition, and as it stands today, there are no individuals that I can think of who are standing out front taking responsibility as a National Muslim leader of the Muslims in America. The responsibility for opening up dialogue is a shared responsibility

Additionally, morally correct candid dialogue means that we have to open up about racism and the issue of the two Muslim Americas. We’d have to talk about Muslim-owned liquor stores and how that impacts the call to Islam and the neighborhoods which house inner city masjids where liquor stores abound. It will be a difficult, grown-up conversation. However, to make the big-boy move and go beyond the surface in addressing our problems as a Muslim people, we are going to have to dismiss with some of this political correctness. There is no way we can get around it.

One of the reasons that Muslims who knowingly or unknowingly perpetuate marginalization have very little to say is that their argument cannot hold to a legitimate discussion. Our scriptures unequivocally reject marginalization or oppression of one Muslim people by another. This is one reason why the issue of Muslim owned liquor stores is a muted discussion in Muslim America despite its devastatingly harmful effects on our inner city neighborhoods. The neighborhoods where many of us live, try to raise our families, and where we do da’wah. Such a terrible blemish on the legacy of Islam in America.

Political correctness will mask the truth like like a Hollywood make-up artist masks a pimple. The Prophet (SAWS) spoke wisely, but he did not adhere to the politically correct status quo of the society in which he was raised. Tawheed (monotheism), by nature, resists political correctness because it assigns supreme will and final authority to the word of Allah and assigns all other words beside it to a secondary station. The only people with complete and unconditional authority to speak on the Lords behalf are His Prophets and in the case of Muslims, the Prophet Muhammad (SAWS).

These realities alone make political correctness incompatible with moral correctness in any absolute sense. Now does what I just said mean that we should not use wisdom in our words, or not follow rules of civility, and use good speech in how we express ourselves? Absolutely not. Allah says” “invite to the path of your Lord with wisdom and good rhetoric”[1]. In order to move ahead spiritually, we have to speak religious truths according to scripture whether they are politically correct or not. Truth according to orthodox Muslim belief is not, and cannot be subject to the constraints of human beings, nor society.

If the Prophet (SAWS) were alive today, people, even some Muslims would probably label him controversial, even radical. During the time that the lived (SAWS), he was called worse than that, but the Prophet (SAWS) was never described, or thought of as, politically correct. The word Islam, which for fourteen-hundred years has meant submission to Allah, now simply means peace in the minds of many Muslims, and as articulated in modern-day Muslim nomenclature. When people understood Islam to mean submission, they associated the word with action and doctrine beholden to a higher authority; Allah.

When people, Muslims included, understand Islam simply as peace, it devaluates Islam from a world faith resulting from revelation and renders it into a simple human trait that requires no action but is instead characterized as passivity and inaction. It takes doing something to be a Muslim, but it takes doing nothing to be peaceful. This not so subtle lexical lunge into la la land regarding the word Islam is just one casualty of modern-day political correctness. The religion of Islam is built upon divine truths, not politically engineered truisms.

American born Luqman Ahmad is a life long Sunni Muslim, the son of converts to Islam. He is a writer, consultant, patriot, and author of the book; “Double Edged Slavery“, a book about how Black American Muslims and converts are marginalized in Muslim America. Imam Luqman Ahmad is is also a former executive committee member of the North America Imams Federation, a founding member of COSVIO, (the Council of Sacramento Valley Islamic Organizations), and the author of the book “The Devils Deception of the Modern day Salafiyyah Sect”, a detailed look at salafiyyism the ideology which forms the mindset of ISIS. He has written blog posts challenging ISIS, Anwar Awlaki, and BOKO Haram on his blog, imamluqman.wordpress.com. Currently he serves as an Associate Imam at the Toledo Masjid al-Islam in Toledo, Ohio. The sentiments shared in this article are his own and not representative of any of his professional affiliations. He can be reached at imamabulaith@yahoo.com