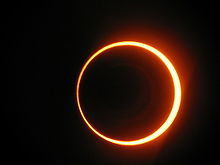 Solar eclipses occur when the moon comes directly between the sun and the earth. The name for the eclipse prayer in Islam is ‘salaatul Kusoof’. The applicable word for eclipse varies in the Arabic language to about six variations, all of which are found in the hadith texts of Bukhaari and Muslim; the most popular terminology according to Muslim jurists is to use the word, كسوف kusoof with respect to a solar eclipse, and the word خسوف khusoof, for a lunar eclipse. A lunar eclipse one one in which the moon appears darkened as it passes into the earth’s shadow. The most correct employment of the two terms is to use them interchangeably for both solar and lunar eclipses. There are no other weather related phenomena, or celestial events for which the Prophet (SAWS) has sanctioned a particularly styled prayer in congregation, besides an eclipse. There is no specific congregational prayer for earthquakes, tornadoes, sandstorms, rain storms, hailstorms, comets, shooting stars, solar flares, blizzards, or for any other such events besides an eclipse, hence, its significance, and the importance of making the salaatul Kusoof (eclipse prayer) in congregation. Making du’aa during rainfall is sunna, and there is a salat for rain (salaatul is’tisqaa) in cases of drought. However, these prayers are general in nature and do not follow particular performance protocols, or time requirements like salaatul Kusoof. Solar eclipses are a sign from Allah sub’haanahu wa ta’ala, intended to strike awe into the hearts. They are rare, usually occurring 2 to 3 times annually, worldwide.

The Salaat During the Eclipse

Performing the salaat during a solar or lunar eclipse is considered sunna mu’akkadah (constant, uninterrupted sunna) by agreement of the scholars; based on the hadith; “Neither the sun, nor the moon, eclipse due to the death, or life of anyone, but they are signs from amongst the signs of Allah ta’ala, so if you see any one of them, stand up and pray”[1]. The Prophet (SAWS) prayed this salaat, and a miraculous occurrence took place; in the hadith of ibn Abbaas, he said: Once a solar eclipse occurred during the lifetime of the Messenger of Allah (SAWS). He offered the eclipse prayer. His companions asked, “O Allah’s Apostle! We saw you trying to take something while standing at your place and then we saw you retreating.” The Prophet said, “I was shown Paradise and wanted to have a bunch of fruit from it. Had I taken it, you would have eaten from it as long as the world remains.”

How it is performed

Salaatul Kusoof has no athaan, no iqaamah, and is preceded by the words, assalaatul jaami’ah (the prayer is gathering) as reported in the hadith of Aisha; an eclipse of the sun occurred during the time of the Prophet (SAWS) and he ordered a man to call out: ‘assalaatu jaami’ah’.[2] Salaatul Kusoof consists of two rak’aat, and each rak’at has two rukoo, two qiyaams, and two recitations instead of one respectively for other prayers.  It is sunna to perform salaatul Kusoof in congregation, inside the Masjid, behind an Imam where salaatul Jum’ah is held as was the practice of the Prophet (SAWS). However it is permissible to pray in other areas as well

When is it performed?

Salaatul Kusoof can only be done during a solar or lunar eclipse. The time for performing salaatul Kusoof begins at the beginning of the eclipse and concludes when the eclipse is completely ended. The prayer can begin as soon as the eclipse starts or at anytime thereafter, and it is sunna to continue praying until the eclipse has ended.

Salaatul Kusoof is legislated for the stationary (non-travelling) person as well as the traveler. It is permissible for men, women and children in the same manner as salaatul Jum’ah.

Salaatul Kusoof is an important sunna of the Prophet (SAWS). It should be prayed in congregation in a Masjid whenever possible and people should come out to observe the prayer if they are able. And Allah knows best.

Shaykh Abu Laith Luqman Ahmad, a Philadelphia native, is a writer, a researcher and Imam of the Islamic Society of Folsom, in Northern California. He is a former executive committee member of the North America Imams Federation (NAIF), and the CEO of ‘Mosque Without Borders’, an organization that address Muslim sectarianism in the United States. He is also and the author of the new book, “Double Edged Slavery “, a critical and authoritative look at the condition of African American and convert Muslims in the United States, and the book: “The Devil’s Deception of the Modern Day Salafi Sect “, a look at the ideological underpinning of modern Salafist extremism. He blogs at imamluqman.wordpress.com, and can be reached at imamabulaith@yahoo.com.